Going faster off-road, how to build your skills in the dirt

Regardless of skill level, we always want to progress, to conquer tougher terrain, to ride smoother and to go faster. It’s no secret that going too slowly can make rough terrain more difficult, but adding speed can be intimidating and increase the risk and severity of a crash.

I am by no means advocating just twisting the wick and hoping for the best. One can do small things to build their skill to make the step up to the next level.

The day will come when you go on an “easy ride” that upon further reflection would have been a wicked tough experience a few years back. I’ve looked back over the 15 years I’ve been riding and worked up a short list of things that stick out in my personal development riding big bikes off-road.

Here is some free advice, so save your receipt. Results are guaranteed or your money back!

If you get a chance to ride proper, small, lightweight dirt bikes, do it. This is not to say “Get rid of your large adventure bike”. Small bikes are just a different type of fun, and I enjoy both for different reasons. On smaller dirtbikes the weight is much less, the overall off-road capabilities are greatly increased (more suspension travel, more ground clearance, more aggressive tyres) and the intimidation of a mistake goes down.

The techniques are the same. Things like picking a line, body position, and the body-English to make the bike move the way you want it to. Just as my mountain biking skills transferred to dirt bikes, dirt bike skills will transfer to adventure bikes.

Your mind will get acclimatised to working at faster speeds and over tougher terrain. Once you ride gnarly single-track, riding tamer double-track or forest service roads will always feel easier, regardless of the motorcycle you are riding. 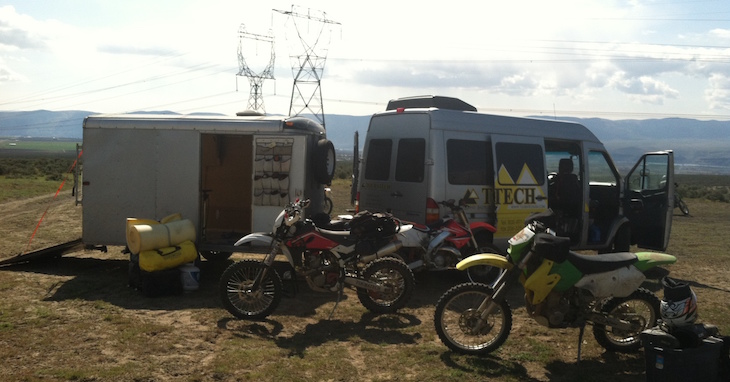 New riders always view the front brake with suspicion and distrust, on the street or in the dirt. Even seasoned street riders, when thrown into the new environment of off-road, seem to have to learn to use the front brake all over again.

In short, use it, it simply works better. I mention this mostly because one day I realised I was using my front brake off-road almost as aggressively as I would on the street. No one told me to do it, I found my way to that point myself, but maybe hearing to do it will save you some time getting to that same point. 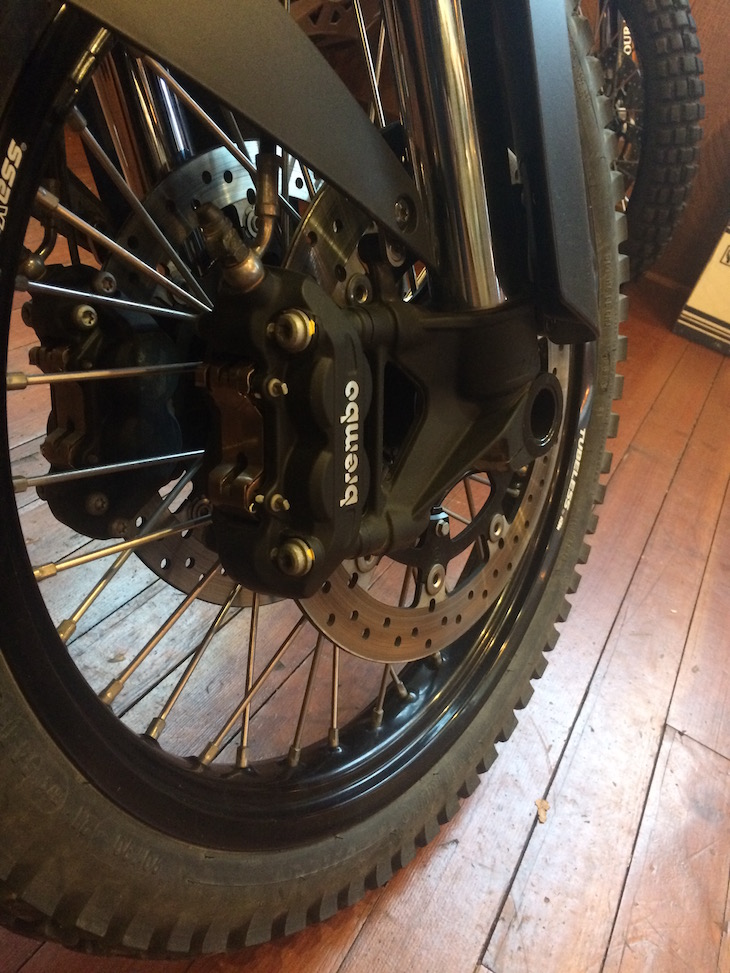 Blasting up hills is fun, and not too intimidating. It’s likely you will lose most of your speed in a crash before you hit the ground, so people tend to ride up hills more aggressively. Then there is literally the other side, the down side.

Going down hill you have gravity pushing you, even off the throttle you’ll gain speed. The natural reaction is to brake to stop that push. There are plenty of times when you need to use the brakes on hills, but try to keep some momentum going.

Switch between the front and rear brakes, carry speed for a second then brake again. Practically speaking, on a long loose downhill, if you just stay on the brakes, so much dirt will build up around your front tyre that you will lose steering control. This is akin to driving in the snow and you lock the brakes (without ABS) and feel the slide. You are no longer in control.

You need to release the brakes to regain traction and steering. It will feel counter-intuitive to speed up to slow down, but that is the science of it. This will not be an overnight change.

Start by dragging the engine in gear with the brakes applied and then just drag the engine. Finally start to add some gas. The day I realised I was not braking on a hill and then again the first time I was on the gas going down hill, both felt like real victories. I was faster and more confident and hills were just hills, not scary lava monsters. 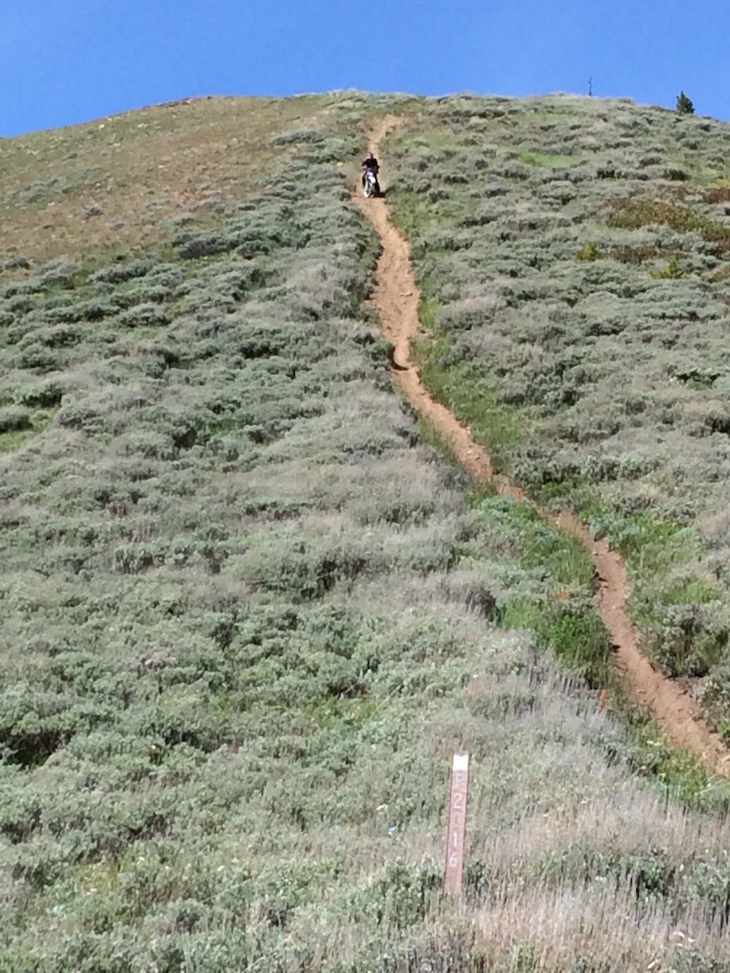 Change up a gear

If second gear feels good, put it in third. Every engine has an optimum RPM range. Too low, the engine lugs and too high it’s hyper-sensitive and twitchy. I learned this on a two-stroke 1997 KTM 200 EXC. High RPMs were even twitchier as the reed valves were fully open and the bike was on the pipe.

The same thing happens a bit more subtly on a four-stroke. I still do this today. If a gear is feeling really comfy I click up and speed up to get the throttle response that I want.

It still seems weird that riding high in one gear can be too much of a handful, while riding lower in the next higher gear is easier and faster, but it works in practice. This is probably the single most important thing I tell riders that want to go faster. It can be slightly intimidating, but it works. 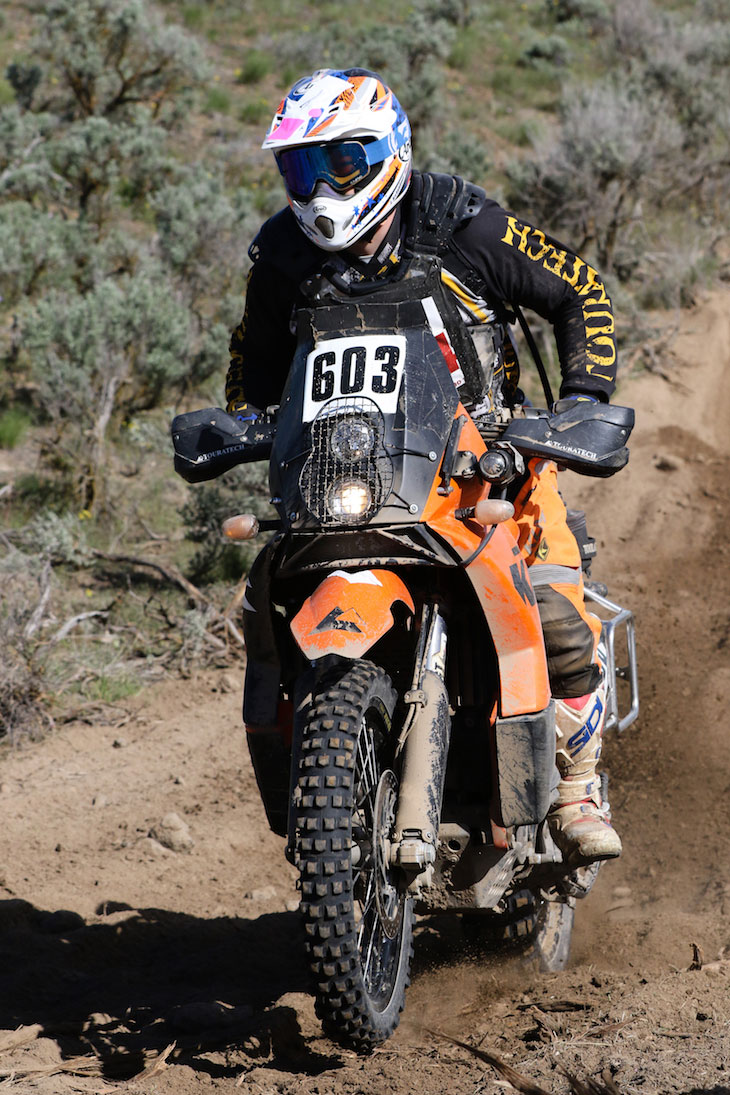 I follow MotoGP and have seen World Champion riders such as Valentino Rossi and Marc Marquez throw their multi-million dollar motorcycles down the track on a risk that didn’t pan out. I’m not a pro and odds are, neither are you.

At the end of the day, mistakes are great tools for learning. There have been a few times I have looked like a God wheelie jumping a big log, but most of the time I end up half over it, stuck and pushing off with my feet to finish the crossing. Be okay with making mistakes, with crashing, with not quite making it.

Attack a hill, time after time, until you get it. With each attempt you learn something. Even if you don’t fully realise it, the next time you’ll adjust and go further. To grow your ability it takes the willingness to take a risk, to push outside of your comfort zone, to try something new.

Often, it does not pan out first shot, but over time it might, and you’ll learn even if it doesn’t. 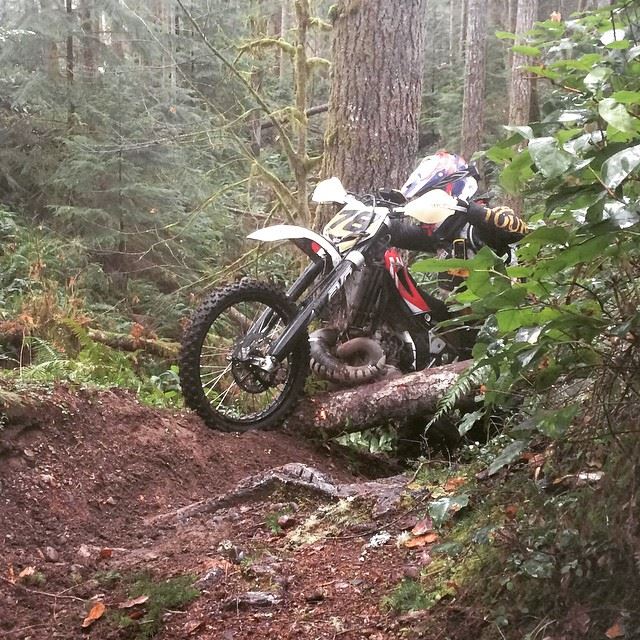 Riding motorcycles off-road is physically demanding. Get in shape, even if it’s just a few push-ups in the morning, riding a bicycle to work, or a walk in the evening. I’ve hit the point during a ride (after dead-lifting a 500lb KTM off the deck a dozen times in as many minutes) that there was no doubt I was running on fumes, my tanks were dry.

Ride as much as you can. You want to be comfortable on a motorcycle. Even if it is just street miles, the accumulated experience with the fundamental mechanics of riding, the throttle and clutch control, the feeling of the brakes at the limit all through your feet and fingertips, will add up. It will be one less thing to think about in the dirt. It will become second nature.

The importance of bike preparation is often forgotten. Make sure your bike is in good running order and get the controls where you like them. Have your suspension properly set-up and tuned and have fresh tyres.

These few things can make the difference between suffering though a ride and having a great time. Once again, ride as much as you can and have fun! 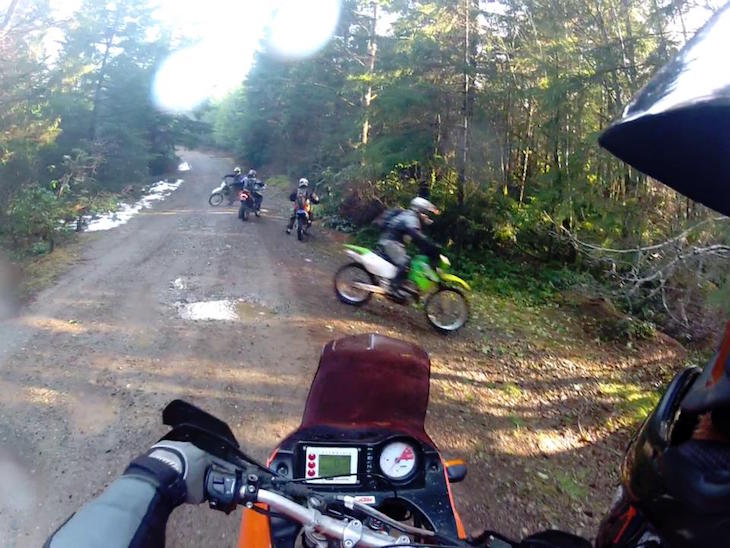 Eric is an incurable motorcycle nut. He’s owned and wrenched on everything from vintage scooters and vintage motocross bikes to modern machines, and now spends much of his time riding and talking about adventure motorcycles. Eric is a key part of the Touratech USA race team, and when he’s not racing a local hare-scramble or vintage motocross race, or working on motorcycles in his garage, he can be found roaming the Cascade Mountains on his KTM 950 Adventure looking for new routes for the annual Touratech Rally.